Found throughout the Canadian Maritimes and remote parts of northern new England, this fir was the first plantation grown Christmas tree in the northeast.  Its soft, dark green foliage with flat needles about 3/4" in length has a distinctive "Balsam" aroma.  Its steady branching and excellent needle retention have made it a long time favorite Christmas tree. 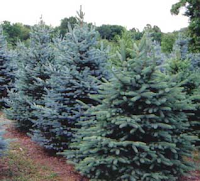 *Blue Spruce
Often used for stuffing pine-pillows, these sharp needles are 1 to 1 1/2 in. in length. This species is bluish-gray in color. Needles have an unpleasant odor when crushed. This Christmas Tree has good symmetrical form and an attractive blue foliage. It also has good needle retention. 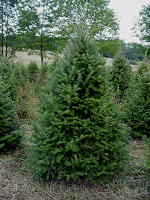 *Canaan Fir
This variety is a short needle tree known for its fragrance and excellent needle retention. The needles are usually green to blue green. It is found widely within the Canaan Valley of Northeastern West Virginia. This tree is a genetic variation of traditional Balsam Fir. Although similar in appearance to the traditional sources, its needles tend to be longer, about 1" in length, and vary more in color. Relatively new to the Christmas tree industry, its popularity continues to rise. 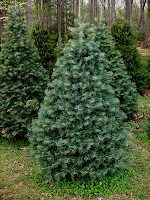 *Concolor Fir
Also known as White Fir, this evergreen has short, flat, soft needles that are silvery blue-green about 2" to 3" in length. The Concolor Fir has a distinctive citrus aroma that people can not get enough of. Its outstanding color and excellent needle retention make it an increasingly popular Christmas tree.

First studied by Scottish botanist David Douglas in the 1820s, this conifer is widely distributed throughout western North America from the interior lake country of British Columbia to the mountains of Mexico.  Found in the central Rockies, the hardy "blue" strain is widely used as a Christmas tree in the northeast.  Its lush blue green foliage with needles about 1" in length is very attractive.  Its sturdy branching and outstanding needle retention make this evergreen a holiday favorite

Also known as "Southern Balsam", this stately fir, native to the Great Smoky Mountains of western North Carolina and eastern Tennessee, is closely elated to its northern counterpart.  Its soft, emerald green needles with silvery undersides are about 3/4" in length.  Its bottle brush texture sturdy branching, and outstanding needle retention make it a superb Christmas tree who's popularity has grown in recent years. 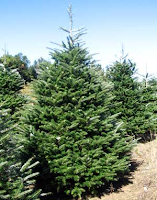 *Korean Fir
The Korean Fir is an exotic tree species. This tree is known for its excellent needle retention and pleasant citrus smell. Needles are a brilliant bright green with a bright white underside - truly striking no matter how you look at it.

*Meyer Spruce
This variety is similar in many ways to the Colorado Blue Spruce, but with much softer needles. It is sometimes called Chinese Blue Spruce. It is usually a vary dark green in color, with short rich blue-green needles that are vary even in length. Branches are symmetrical about the truck and the tree has excellent needle retention.

*Nordman Fir
The Nordman Fir is a very full tree in terms of both branches and foliage. The needle color is a very deep green and the tree can spread to a very wide base. The needles display a dark, green, glossy upper-surface with a contrasting silvery white under-surface. The needles are flat with rounded tips, and grow in symmetrical rows circling around the branch. It's light scent makes it a desirable species for consumers with tree allergies.

*Norway Spruce
Native to the great Baltic conifer forests of northern Europe, this tree has shinny, dark green foliage with needles about 1/2" in length.  Often found at a choose and harvest plantation, the rich foliage of this spruce can exhibit good needle retention with proper care.  Its value as an ornamental landscape tree is also widely recognized.

*Turkish Fir
The Turkish Fir is native to northern Turkey and is now being grown for Christmas tress in the United States. Their needles are fairly flat and radiate out from the stem. This tree has two-tone needles that have dark silvery-green underside, which is very attractive and has excellent keepability. It's strong branches can hold heavy ornaments and needles are retained a long time in the home if the tree is kept watered. 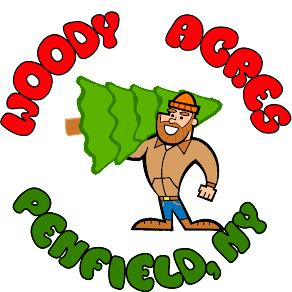